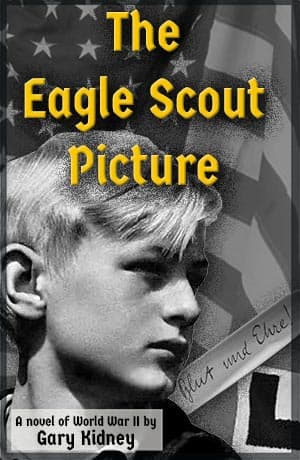 When you pretend to be someone you are not, does it change who you really are?

The Eagle Scout Picture is historical psychological suspense thriller set during World War II and the protagonist is a spy, but the real theme is a young man struggling with a duality of identity, focusing on the question above. Like Doerr’s All the Light We Cannot See, it’s about coming of age in Nazi Germany. Like Stallworth’s Black Klansman, it’s about someone being something one is not. Like Follett’s Eye of the Needle, it’s full of action, mystery, lies, and physiological twists.

In June 1940, seventeen-year-old Fred Brown’s future is re-written by three men — an Army major, a college professor, and a German doctor. He calls them the butcher, the baker, and the candlestick maker. They capitalize on his German fluency and his whiz-kid electronics by sending him as a deep cover spy, code-named "Zelly," to infiltrate Nazi society, prepared to activate in case of a future war. He finds the task harder than anticipated, learning life lessons in an unusual crucible where discovery and death haunts every step with Stengler, a lurking Gestapo officer, taking instant dislike for him.

He discovers much of what he knows about himself, his family, and his world are elaborate lies. As Fred works to fulfill his duty to America, Zelly builds V-2 rockets. Accomplishing both the mission and the job seems impossible while maintaining sanity. Five years of war changes things, requiring self-assessment. Is he Fred or Zelly? He wants to complete his mission and go home. But where is home?